Revealing the ugly underbelly of human trafficking, one woman answers the question: What can we do?

‘Human trafficking’? That can’t possibly be a real thing happening around me…

Those were the questions running through my mind as I sat on my friend’s couch in Sydney, Australia back in 2008 listening to her tell me about a new nonprofit where she was volunteering in the fight against human trafficking. She told me how thousands of young women and men were being lured away from their families into false jobs or false relationships and sold as sex slaves or forced labor — never to see their families again. She also said there were organizations starting to do something about it in many countries, and the need was tremendous.

I left her house that day with a heavy heart and a scrambled mind, wondering if what she had said was really true. My first impression was likely not uncommon to most when they first hear of it — How could this really be happening in the year 2008… let alone 2020? It just didn’t seem possible. I was 26 years old at the time with two babies and a husband, barely scraping by because we had foregone our budding careers back in the States to live abroad for a few years.

So I tried my best to forget about all of the emotions I was having in response to the conversation with my friend, and I carried on with my life. But I couldn’t shake it.

A few months later, my family moved back to the States, and there it was again — human trafficking. By this time, awareness had gained momentum and I knew this tragedy was a reality all over the globe. I also knew that this time, I wasn’t going to pretend otherwise… not now, and never again.

I didn’t have to look far. I would learn that this was, in fact, something not only happening in my home state, but in every state across the U.S. — to women just like me and to kids just like my own, a sobering reality. Initially I tried to contact nonprofits that had formed around the issue to see if I could volunteer, but my efforts were not very fruitful. I wrote a few articles and raised awareness in a very small circle of community leaders, but I could never figure out how to do something as big as I wanted to do. I grew frustrated, but I kept looking for opportunities, praying that modern-day slavery, human trafficking, and child exploitation would end, and I tried to stay ready to join the anti-trafficking movement in a big way if the opportunity presented itself.

But waiting didn’t make it go away… or create any impact.

Tragically, all these years later, human trafficking is still a growing global reality. Modern-day slavery is still being perpetrated around the world and in every state in the U.S., and it continues to surge with over 40.3 million victims of human trafficking on the planet (Polaris Project) and an average of 150 reports per day in the United States alone (National Human Trafficking Hotline).

Today, I know in my bones that we have the power to stop it. Human trafficking and exploitation can stop in our generation if each one of us takes a few simple steps right now.

It took 12 years too long for me to realize it. Twelve years of working in the nonprofit field. Twelve years of sitting on my hands and writing in my closet until this past summer when I sat at my favorite coffee spot one morning telling a writer friend about the issue and why I’m so passionate about it, and she leaned forward and spoke a question that prompted this article and fuels many more to come:

And that’s what we all want to know, right? It’s big. It’s ugly. It’s like a horror story from a movie, but what can be done?

A lot can be done in five simple steps.

In fact, if every single person who reads this article takes these five steps and shares this article with five people who also take these five steps, and that pattern repeats itself over and over again, human trafficking can be stopped all over the globe in a matter of months. And that’s a beautiful reality. Let’s not turn away. Let’s not pretend it’s bigger than us. Instead, let’s do this together.

Step 1: Refuse to buy sex or any type of pornography and shift your awareness about those who sell it.

This one may seem easy for most of us, but I think we would be surprised to find out that buying sex and pornography happens more than we know by people that we may know, and it causes more human trafficking and exploitation than we probably realize. Instead of thinking that people who sell sex are the problem, start seeing the issue a different way. What if the person selling sex is the victim and the people buying it and forcing them to sell it are the criminals? In fact, that is the reality.

To read a true story about this issue, get yourself a copy of Rescuing Hope: A Story of Sex Trafficking in America — it rocked my world just a few months ago. And I can’t tell you how many times I ran across the idea of supply and demand during my research, which this book puts into clear perspective. The fact is simple – when we all stop buying sex and pornography everywhere — even in movies, games, Internet searches, magazines, photographs, and yes, in motels, backrooms and brothels, too — there will be zero sex trafficking in the world. When demand goes to zero, so does supply. The math is really that simple.

To do this, buy more food and clothing locally rather than shopping in large chain stores, and purchase fair trade as often as you can. It’s true — making purchases from ethically-sourced, local producers makes a huge impact.

It may seem big, but actually, it’s not — just start with one thing and then another and another. And then it’s done. To find out how you score in this area, take the quiz at slaveryfootprint.org. I was appalled at my own results revealing that 41 slaves work for me based on the purchases I make for my household — 41! And I thought I was a minimalist. If you can’t find things you like that are fair trade or ethically sourced, start with these slave-free companies or start your own brand like these makers I love: Mercy House Global, Bead for Life, Whispers of Love Uganda, and my own tiny start-up handmade Uganda bead shop at my website Togetherness Redefined.

Don’t be afraid to search the Internet for human trafficking prevention organizations in your state. Visit anti-trafficking websites to learn how to recognize a trafficking victim. Save the hotline number in your phone (1-888-373-7888) so that you have it when someone needs it. Become familiar with myths and facts surrounding the issue. Print a copy of the warning signs of a trafficking victim so that you can read it often and recognize a victimized person and reach out when you see him or her. Learn where it happens most and how to report labor or sex trafficking when you see it. Read survivor stories and immerse yourself in their world for a few hours.

Knowing the facts will make a huge difference. Responsible companies like UPS are even educating their drivers to be aware of the signs of human trafficking victims.

Step 4: Talk about the issue with people you know.

You don’t have to shout from a rooftop or scream at a street corner to even join the awareness train. You only need to look for small, appropriate opportunities to bring up the subject with your family and friends. If every single one of us talked about this with just one person even a few days out of the year, the impact on the world’s awareness would increase exponentially, eventually reaching every customer of the trade and every profiteer too, letting them know that the world is not going to stand for human trafficking any longer.

As I said to a friend on the phone recently, we have to stop being embarrassed to talk about this issue. We might be parents who don’t feel comfortable talking about sex or prostitution in our normal, everyday conversations, especially around our teenage sons and daughters, but we have to. Not talking about it doesn’t make it go away. In fact, it’s part of the problem. We all have to let people know that we know what’s going on so that the people buying and selling these children will realize they can’t hide anymore. When everyday people start speaking out every day, the universe will shift.

Chances are every person reading this article has crossed paths with someone currently being trafficked (isn’t that terrifying?). Look for someone who needs help, walk over to them, ask them how they are, where they’re from, what they love to do, and see where it goes. Many times, the person you’ve approached is just fine, but it’s that one time when s/he’s not and now has someone who cares… that can potentially make a huge difference.

And that’s it. If we all do those five things and share what we know with others who will also do those five things, the tragedy of human trafficking will end with our generation. While activism and changing the world as it relates to something as horrific as human trafficking may seem like something out of reach for regular everyday people, it isn’t. As Margaret Mead famously said,

Never doubt that a small group of thoughtful, committed citizens can change the world; indeed, it’s the only thing that ever has.

January is Human Trafficking Awareness month… but until this horrible practice is eradicated, it is every month. Will you join me in being the change you want to see in the world?

If you want to know more about this issue and how you can help, visit polarisproject.org. And for more information, here are some links to non-profit organizations to check out:

You may also be interested in reading Mother Nature’s Hourglass: A Biologist Reminds Us That Time Is Running Out by Dave Cannon 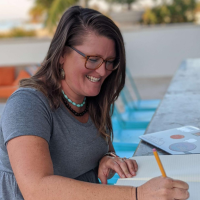 Celeste Orr is the author of Togetherness Redefined: Finding a Different Kind of Family Togetherness, a collection of stories for families who want more adventure, bigger dreams, and deeper relationships. Previously a full-time traveler, she’s now settled on the coast of Maine where she spends her time hiking the mountains of Acadia National Park and writing for family-loving moms at togethernessredefined.com.

Previous Post: « The Grand Cosmic Blessing: Why Dolly Parton Practices The ‘F Word’ Every Chance She Gets
Next Post: Cumin Spiced Carrot and Date Salad (And an Ode to the Beautiful Carrot) »